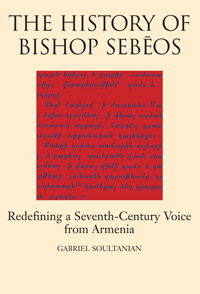 The History of Bishop Sebeos: Redefining a Seventh-Century Voice from Armenia

This redefining of a key narrative of the history of Armenia, written during the seventh century, is a detective story that is as remarkable as it is controversial. Using an array of historical and linguistic techniques, the author defines and solves a string of puzzles in the text that previous studies have erroneously identified and or even altered. What was hitherto declared an imperfect text – not only based on unreliable sources but also the product of more than one hand – is now revealed to be the inspired work of a single author. Any quirks are easily identifiable as due to the writer’s personality or a desire to please his patron.
Sebeos was a bishop of the Armenian royal house of the Bagratunis. The larger part of the work – chapters 6 to 50 – covers the period from the second half of the fifth century up to AD 661. It is an important source since it describes events in the Middle East spanning a crucial period of two centuries, dealing with events in Armenia and the plight of the Armenians, caught as they were between the warring empires of Persia and Byzantium.

Viewed as problematic, however, are the first five chapters, which were written at the behest of Sebeos’ unnamed patron to create a complete history of the Armenian nation up to his own times. Soultanian’s masterful analysis is a rediscovery of the true voice of History of Bishop Sebeos, and a much needed correction of Armenia’s historical record.

THE HISTORY OF BISHOP SEBEOS
Contents
Preface
Maps of Armenia
Introduction
Part I
Commentary: History of a Manuscript Manuscripts and publications
The language of the text
The structure of Sebeos’ History Who was Sebeos?
Is Sebeos the author of the whole History ascribed to him?
Smbat Bagratunis in the History of Sebeos
Maraba in the History of Sebeos
Part II
The History: An Authentic Exegesis
Chapter 1
Chapter 2
Chapter 3
Chapter 4
Chapter 5
Conclusion
Bibliography
Index