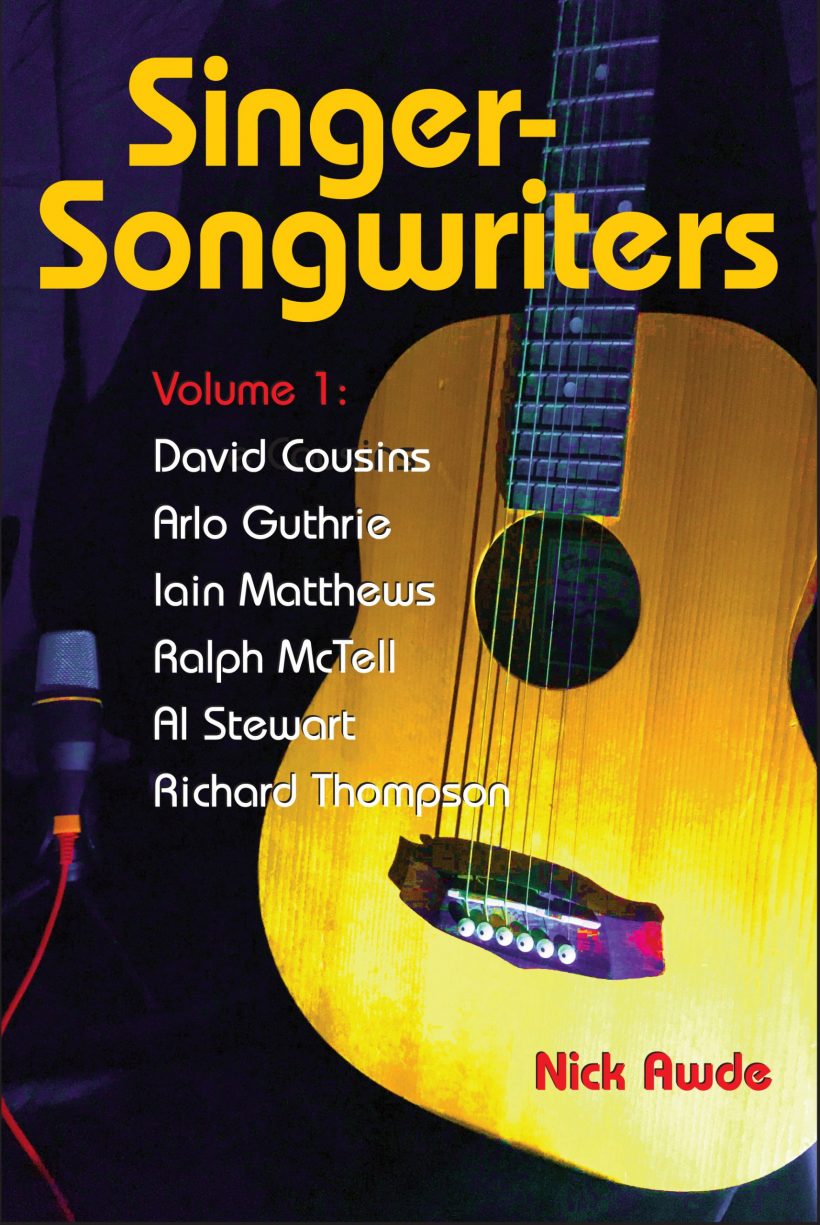 Get your copy early (shipping January)!
Order direct at deserthearts.com and support an independent publisher…

David Cousins (Strawbs), Arlo Guthrie, Iain Matthews, Ralph McTell, Al Stewart, Richard Thompson describe in detail what defines a singer-songwriter and what drives them. They offer their thoughts on the balance between voice and instrument, the relationship between songs and audience, spirituality and society, channelling influences and the context of the politics of the day, while shedding light on the eternal question of which comes first: the words or the music.

Insight-filled interviews with some of popular music’s most influential and enduring talents – Singer-Songwriters Vol 1 is an in-depth look at the craft, life and times of the singer-songwriter, revealed in the contemporary voices of the groundbreaking generation of British (and one American!) singer-songwriters who came of age through the evolution of folk-based music during the Sixties.

NICK AWDE is international editor for The Stage newspaper and co-founder of TheatreGuide London. He is also co-director of the UK Centre of the International Theatre Institute (Unesco), and of the Other National Theatre at Morecambe’s Alhambra Theatre. He has written, illustrated or edited more than 50 books including: Mellotron: The Machine and the Musicians That Revolutionised Rock, and the forthcoming volumes Finnish Rock, Avant-Hard in the UK, Electric Guitarists/Bassists: Electrification of the Nation Vol 1. As a playwright, dramatic works include Pete and Dud Come Again (with Chris Bartlett), Andrew Lloyd Webber: The Musical (book, lyrics & music), Noddy Holder’s Christmas Carol Unplugged, The Europeans (Parts 1-3). As Nick Awde & Desert Hearts, music includes the albums Blues for Blighty (Vols 1-3), Swimming in a Fish Bowl, Mellotronic Belgium Blues, avant-garde opera Belgium-737, and the EPs Selling England by the Pound, Close to the Edge b/w Meryl Streep/Rocket Man, and the single ‘European Man (I Do What I Can)’.