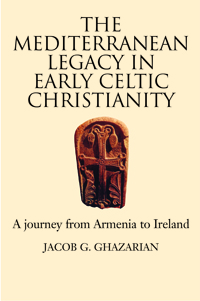 The Mediterranean Legacy in Early Celtic Christianity: A Journey from Armenia to Ireland

Scholars have long been intrigued by the similarities between Celtic religious traditions and those of Egypt, Palestine and the lands of Asia Minor – particularly Armenia. This is the first comprehensive work to explore the fascinating and little-known connections that enabled the Celts of Ireland and the western coast of Britain to remain in constant communion with the Eastern Mediterranean and Middle East. Not just belief systems, but art, literature and architecture show remarkable similarities in the two regions. Despite the vast distances between these opposite ends of the Christian world, extensive land and sea links were forged as a result of commerce and the busy pilgrim routes to Rome and Jerusalem.
Focusing on the 5th to 9th centuries, a period when Europe underwent major demographic and social upheavals, The Mediterranean Legacy provides a groundbreaking historical and cultural insight into the secular and religious trends of the period and defines the key role of Armenian Christianity in the development of the Celtic Christian Church. With over 100 maps and illustrations.Jacob G. Ghazarian has focused his writings on the medieval religio-political interactions of Mediterranean Christianity with the West. He is also author of The Armenian Kingdom in Cilicia during the Crusades: The Integration of Cilician Armenians with the Latins, 1080-1393.

THE MEDITERRANEAN LEGACY IN EARLY CHRISTIANITY

1. Peaceful Neighbours, 5th-7th centuries AD: The faith of a nation. The earliest revival. A new age begins. The conversion of the Anglo-Saxons. The Pelagian heresy
2. The Celts in the Iron Age, 1000 BC-100 AD: The tribes. Delphi and Anatolia. Uncertain origins. The Scythians. Britain, Ireland and Gaul
3. The Romans of the Time, 500 BC-500 AD: The beginnings of Rome. Romans and Christians
4. Seaways to Hibernia: Old seaways. Archaeological evidence
5. Cultural Connections: Gallic contacts. The Spanish factor. Memorial epigrams. The cross of arcs. Pilgrimage. The Annals of Inisfallen
6. The Celtic Church: The Irish church. Early times. The spread of Celtic Christianity. Celtic monasticism in Ireland. The Armenians in a nutshell. Armenian or Celtic? Armenians in Iceland
7. Monasticism: Monasticism in Egypt and Palestine. Western monasticism in Britain. Monasticism in Ireland
8. Irish Literacy and Scholarship, 6th-10th centuries AD: The Irish Thesis. Further east-west connections. Litany of Irish saints
9. Crosses of Stone: The stone crosses of Armenia. The stone crosses of Ireland
10. Imageries of the Faith: Armenian and Irish Christian iconography. The Book of Kells. The Virgin and Child. The Armenian symbol of eternity. The Chi-Rho page. The liturgical fan in the Book of Kells
11. Expressions of the Art: Church building. The evidence at Rahan. A practice unchanged
12. The Enigma of a Brooch: A Carolingian cross? Epilogue