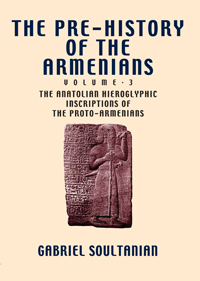 Pre-History of the Armenians, Volume 3: The Anatolian Hieroglyphic Inscriptions of the Proto-Armenians

Volume 3 in the Pre-History of the Armenians series contains further ancient hieroglyphic inscriptions from southeastern Turkey. These are translated and annotated in full, and are accompanied by a comprehensive glossary. A number of crucial misapprehensions by scholars are corrected, and most importantly this study also explains the unknown phonetics of many signs found in Laroche’s extensive catalogue of hieroglyphic glyphs published in 1960. Other sections include an analysis of the language of the inscriptions, which forms a bridge between the ancient Indo-European language and Classical Armenian, with examples demonstrating the development of the phonetics of words and the formation of augmentative suffixes. Also provided is an alphabetized list of transcriptions of these ancient words.

The linguistic evidence proves that since at least the eighth century BC the Hays (Armenians) possessed the scribal schools, temple records and gusans (minstrels) that are mentioned in the History of the Armenians, written during the fifth century AD by Moses Khorenatsi. The Vocabulary and Usage section highlights a number of words previously thought to be loans from other languages and confirms their indigenous status. Additionally, it confirms the provenance of other words, treasures from the long forgotten past that occur in the old lexicons and were considered doubtful. As with the previous Volume 2, each word is thoroughly explained and given its various usages in transcription for the benefit of the reader.

THE PRE-HISTORY OF ARMENIA VOLUME 3

General Remarks about the Language and related subjects