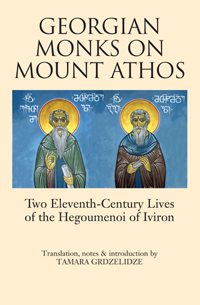 Georgian Monks on Mount Athos: Two Eleventh-Century Lives of the Hegoumenoi of Iviron

This is the first English translation of the Georgian Lives of Euthymios the Hagiorite (955-1028) – along with John the Iberian – and George the Hagiorite (1009-1065). Commemorated as saints of the Orthodox Church, Euthymios and George were distinguished hegoumenoi on Mount Athos during the eleventh century who greatly influenced both the Church of Georgia and Georgian culture.

The end of the tenth century was a period when monks arrived from different parts of the Byzantine Empire to seek the solitary life on the Holy Mountain of Athos in northern Greece. Georgian monks formed a part of the initial steps to introduce the communal way of monastic life there, and one of the first communities on Mount Athos was Iviron, founded as the monastery of the Iberians (Georgians).

The monks of Iviron were strongly supported by their fellow countrymen back in Georgia and they also benefited from imperial patronage. Euthymios and George – wise leaders and spiritual teachers, outstanding translators and writers – were able to play a crucial role in this development by maintaining close contacts with the Byzantine imperial court as well as church leaders both in Constantinople and the Christian East.

Introduction: Georgian Monks on Mount Athos in the Tenth-Eleventh Centuries

The Life of Our Blessed Fathers John and Euthymios, and the Story of Their Worthy Citizenship as Described by the Poor Hieromonk George the Hagiorite