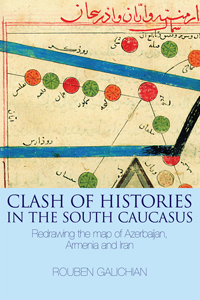 Clash of Histories in the South Caucasus: Redrawing the map of Azerbaijan, Armenia and Iran

Rewriting history and redrawing boundaries are ancient political strategies for shaping national identity, nation-building and establishing territorial claims. Ethnicity and cultural heritage are especially powerful symbols, and therefore targets, for territorial claims ­ a process exemplified by the Republic of Azerbaijan¹s state-sponsored invention of its own national identity. As the only former Soviet republic not to be created from an established ethnic group, ever since its formation in 1918 Azerbaijan has used strategies adapted especially from the USSR and Pan-Turkism movement to create a nationalistic ethnos/ mythos at odds with the historical and geographical reality.

This new study examines the motives and methodology employed by Azerbaijani historians and geographers over the past century in officially recreating the history, boundaries and even ethnicity of this historically volatile region. Particular focus is given to Azerbaijan¹s campaign for the geohistorical appropriation of neighbouring Armenia and Iranian Azerbaijan, a selective campaign that ignores Georgia and Russia¹s North Caucasus. The evidence of the ancient and later cartographers along with the Graeco-Roman historians and the accounts of Islamic and European travellers confirm the international position that runs counter to Azerbaijan¹s claims.

ROUBEN GALICHIAN was born in Tabriz, Iran, to a family of immigrant Armenians who fled Van in 1915 to escape the Genocide, arriving in Iran via Armenia, Georgia and France. After attending school in Tehran, Rouben received a scholarship to study in the UK and graduated with a degree in Engineering from the University of Aston, Birmingham, in 1963. His books include Historic Maps of Armenia: The Cartographic Heritage (2004, plus expanded version in English, Russian and Armenian, 2005), Countries South of the Caucasus in Medieval Maps: Armenia, Georgia and Azerbaijan (2007), and The Invention of History: Azerbaijan, Armenia, and the Showcasing of Imaginations (2009/2010), which documents the culture and history of Nagorno-Karabakh through the centuries. For his services to Armenian historical cartography, Rouben was awarded in 2008 an Honorary Doctorate by the National Academy of Sciences of Armenia. In 2009 he was the recipient of Armenia¹s Vazgen I Cultural Achievements Medal. He is married and shares his time between London and Yerevan.

CLASH OF HISTORIES IN THE SOUTH CAUCAUS
Redrawing the map of Azerbaijan, Armenia and Iran

1. The roots of fabrication and invention

2. Azerbaijan’s intentions towards its neighbours

3. On Armenians as newcomers to the Caucasus

4. The Methodology of appropriating the culture of others

5. History viewed through the cartographic record

6. Maraba in the History of Sebeos