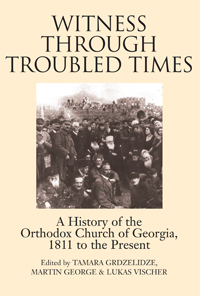 Witness Through Troubled Times: A History of the Orthodox Church of Georgia, 1811 to the Present

Deprived of its full right to exist under Imperial Russia and persecuted by the Soviet Union, the Orthodox Church of Georgia had to wait for the break-up of the USSR and the creation of an independent Georgia before it could enjoy its freedom once more. However, the Church faced the daunting task of rebuilding its clergy, reconstructing its destroyed monuments and reclaiming its looted holy relics and treasures, as well as redefining its former place within society.
Witness Through Troubled Times is the first in-depth study of the subject to appear in English. Written by prominent church historians from Georgia, new research illuminates the as yet untold story of the struggles and hardship faced not only by the Church but by a whole nation as it suffered a systematic onslaught on its age-old culture and religion.

After the annexation of Georgia by Tsarist Russia in the early 19th century, the Church immediately came under threat. In 1811, Russia removed its independence by placing it under the authority of the Russian Orthodox Church – a major step in the wider plan to russify and absorb the Georgian nation into the empire. Although the 20th century brought further oppression under the Soviet Union, the Georgian Church never ceased its resistance nor stopped hoping that one day it would regain its independence and true identity.

Part II:
The Orthodox Church of Georgia in the 19th and 20th centuries Abolition of autocephaly and formation of the exarchate, 1801-1840s by Zaza Abashidze
The Georgian exarchate, 1850-1900 by Eldar Bubulashvili
Between the two revolutions, 1901 to 1917 by Gocha Saitidze
Restoration of autocephaly and times of trial, 1917-1952 by Sergo Vardosanidze
From oppression to rebirth, 1952-2003 by Sergo Vardosanidze