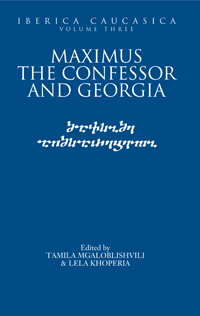 The name of Maximus the Confessor is closely linked with Georgia: after the church father was exiled from Byzantium in 662 with two of his disciples, he spent his last days in Lazica, Western Georgia, and died there. Despite the abundant scholarly literature in Georgian about Maximus, international scholarly circles have been largely unaware of the Old Georgian translations of his works, made during the tenth-twelfth centuries, and local ethnographic and folklore materials. These form a rich source for the study of Maximus’ literary heritage and life, particularly the final period of his life after his deportation, as well as shedding light on the links between between Georgia and Byzantium.

This volume gathers the results of decades of research, most of which appears for the first time in English translation. The articles concentrate on the Georgian sources that deal with Maximus’ life and literary legacy, creating a collection that will be of value not only for those studying Maximus’ life and works but also for those who are interested in Georgian culture and history in general. 10 colour illustrations, 18 B&W illustrations and maps.