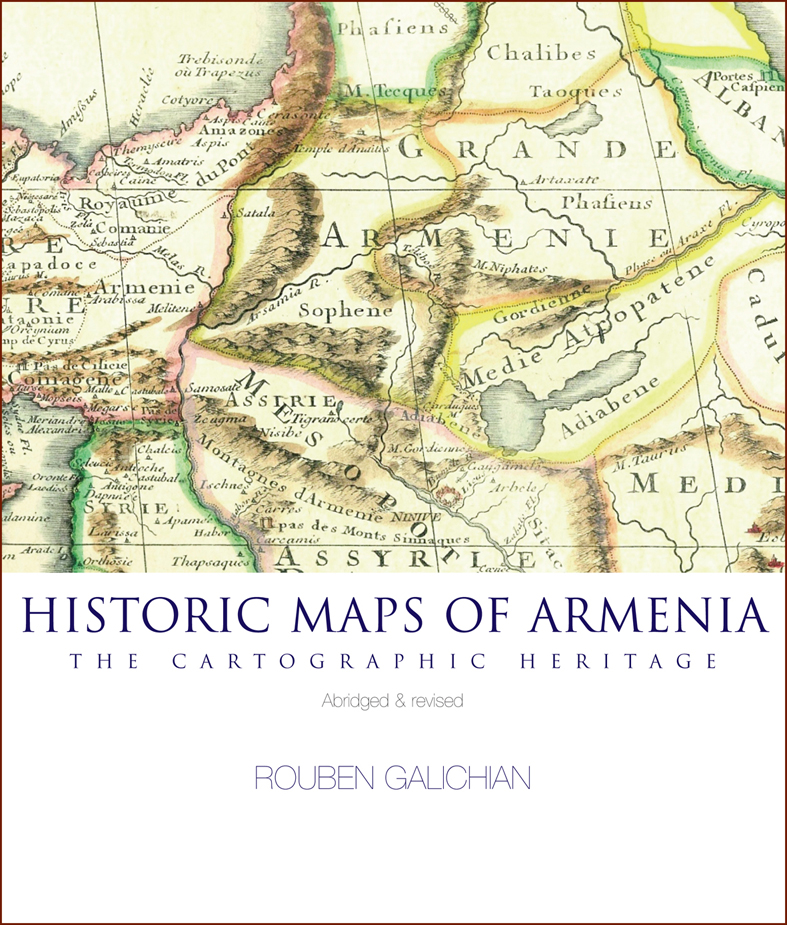 Historic Maps of Armenia: The Cartographic Heritage (Abridged and revised)

With this abridged and revised new edition of his critically acclaimed large-format study, Rouben Galichian shows the continuous geographical presence of Armenia via a number of historically important maps. All these maps were prepared by the highest cartographic and geographic authorities of their time and constitute a vital part of the world cartographic heritage. The Preface is by Christopher Walker.

Here we can see the most ancient world map, where Armenia (the land of Ararat or Urartu) is mentioned, moving on to the maps of Greek and Alexandrian geographers and medieval Islamic and Christian authors, continuing to the Renaissance and modern times. A brief description of the history of cartography leads to the map section, where the reader will observe that the country called ‘Armenia’ is situated in the area sometimes called the Armenian Highlands or Plateau, roughly in the geographical area south of the Caucasus range of mountains and east of Asia Minor or Anatolia, between the Black Sea and the Caspian Sea.

Praise for the original edition…

“The book presents an extraordinary collection of maps of an area which has played an extremely important role in the geopolitical relationship between East and West.” —Patrizia Licini, Bollettino della Società Geografica Italiana

“This beautiful publication fills a serious lacuna in Armenian studies and is a welcome addition to the growing number of atlases of Armenia currently available.” —Robert H. Hewsen, Journal of the Society for Armenian Studies

“This will undoubtedly fill an important gap in our knowledge on the representation of Armenia and the whole Near East.” —Claude Mutafian, historian

Rouben Galichian (Galchian) was born in Tabriz, Iran, to a family of immigrant Armenians who fled Van in 1915 to escape the Genocide. His books include Clash of Histories in the South Caucasus: Redrawing the Map of Azerbaijan, Armenia and Iran (2013), Countries South of the Caucasus in Medieval Maps: Armenia, Georgia and Azerbaijan (2007), and The Invention of History: Azerbaijan, Armenia, and the Showcasing of Imaginations (2009/2010), which documents Nagorno-Karabakh. For his services to Armenian historical cartography, Galichian was awarded in 2008 an Honorary Doctorate by the National Academy of Sciences of Armenia. In 2009 he was the recipient of Armenia’s Vazgen I Cultural Achievements Medal. He shares his time between London and Yerevan.