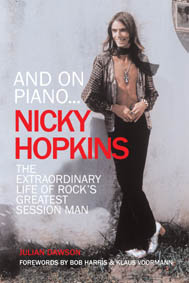 And on Piano… Nicky Hopkins: The Extraordinary Life of Rock’s Greatest Session Man [OUT OF PRINT]

If you study the album covers of the greatest British and American bands and recording artists of the sixties, seventies and eighties, one name crops up with stunning regularity: Nicky Hopkins. Known as the ‘Sixth Rolling Stone’, no other rock pianist was held in such high esteem or played on more important recordings. His trademark licks graced landmark songs such as the Rolling Stones’ ‘Sympathy For The Devil’ and ‘Angie’, the Beatles’ ‘Revolution’ and Joe Cocker’s signature ballad ‘You Are So Beautiful’. Nicky’s client list included the Who, the Kinks, Jeff Beck, all of the ex-Beatles, and countless other leading names of the era. Author Julian Dawson knew Nicky Hopkins and worked with him only months before his untimely death in 1994. He has spent ten years researching and speaking in person to those that knew Nicky best, including Keith Richards, Pete Townshend, Rod Stewart, Ray Davies as well as close friends and family. The result is not just an intimate and revealing portrait of one of rock music’s unsung heroes with all its highs and lows, but a document of a forgotten age and a glimpse behind the scenes where the classic music of our times was made, in studios and onstage.

THE AUTHOR: Julian Dawson, born in 1954 in London, is himself a singer, songwriter and busy performer, who has recorded more than twenty albums in a career spanning more than thirty years. He has worked closely with musicians such as Richard Thompson, Iain Matthews, Dan Penn and Lucinda Williams. He lives with his family in Somerset.