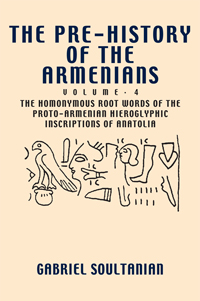 The Pre-History of the Armenians, Volume 4: The Homonymous Root Words of the Proto-Armenian Hieroglyphic Inscriptions of Anatolia

Volume 4 continues Gabriel Soultanian’s epic series on the language and origins of the hieroglyphic script of the Proto-Armenians and its inscriptions. Part I is a comprehensive glossary of the homonymous root words that appear in the hieroglyphic texts studied throughout the series. Based on historical fact and phonetic comparison, all these words (except for the odd appearances of Hittite and Aramaean) are shown to be indisputably indigenous and hence not borrowings from the Iranian branch of Indo-European as generally believed.

Part II compiles translations of a range of ancient inscriptions in addition to those already translated and published in Volumes II & III of The Pre-History of the Armenians. Concise introductions for
both sections place the inscriptions within their historical
and linguistic contexts.

THE PRE-HISTORY OF ARMENIA VOLUME 4

Part I
– The Homonymous Root Words

Part III
– The Pre-History of the Armenians
– Armenian or Luwian Hieroglyphics?