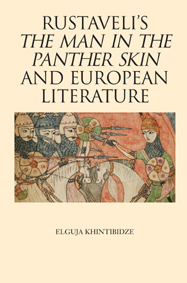 Rustaveli’s ‘The Man in the Panther Skin’ and European Literature

As the creator of ‘The Man in the Panther Skin’ (‘Vepkhistqaosani’), the pinnacle of medieval Georgian poetry, the poet Shota Rustaveli (who lived at the turn of the 12th-13th centuries) is one of the greatest exponents of Georgian culture. This in-depth study uses connected themes to trace his poetry’s influences in Western European literature. An analysis of the characters and key motifs in the 6,500-line episodic work identifies features shared with ‘A King and No King’ and ‘Philaster’, popular Jacobean tragicomedies by Francis Beaumont and John Fletcher, thus establishing a framework for the reconstruction of early cultural contacts between Georgia and Western Europe. The vibrant themes of courtly love, friendship and chivalry in ‘The Man in the Panther Skin’ link Rustaveli’s humanistic worldview clearly to those of writers such as Dante and Petrarch, ideas that developed in the Late Medieval period and led to the flowering of the Renaissance. Rustaveli’s contribution thus shows Medieval Georgian cultural and social thought to be an integral part of the wider European movement, resulting from centuries of cross-fertilisation-as evidenced in the spread of Georgian studies in the West, from the first mentions in Classical times to the development of modern Georgian and Rustvelological studies as well as the rich tradition of translations of Rustaveli’s masterpiece into European languages.
THE AUTHOR: Elguja Khintibidze is Professor of Old Georgian Literature at Tbilisi State University. He is also head of the university’s Institute of Georgian Literature, and chairman of the Fund for Kartvelian Studies. He is the author or editor of more than 200 books and articles published in Europe and Georgia, including ‘Georgian-Byzantine Literary Contacts’, ‘Georgian Literature in European Scholarship’ and ‘The Worldview of Rustaveli’s The Man in the Panther’s Skin’.

RUSTAVELI’S ‘THE MAN IN THE PANTHER SKIN’ AND EUROPEAN LITERATURE