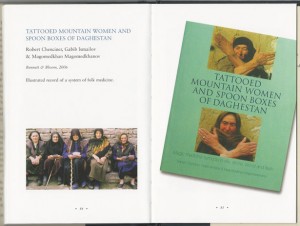 We’re grateful to our fellow Desert Hearts author Oliver Gizzard (The Commuter’s Tale) for bringing to our attention the truly wonderful How to Avoid Huge Ships and Other Implausibly Titled Books. For featured prominently therein, as the runner-up for the 2006 Diagram Prize, is Robert Chenciner et al’s Tattooed Mountain Women and Spoon Boxes of Daghestan.

Compiled by Joel Rickett, How to Avoid Huge Ships was released in 2008 to mark the 30th anniversary of The Bookseller/Diagram Prize for Oddest Title of the Year (aka the Diagram Prize), the annual contest run in collaboration with the UK’s Bookseller trade magazine to determine the oddest book title of the year.

Founded in 1978 by London book packagers the Diagram Group to lighten spirits on a dull afternoon at the Frankfurt Book Fair, the prize is a joyous celebration of the barmy side of publishing. The winner was initially decided by a panel of judges, but since 2000 the winner has been decided by a public vote on The Bookseller’s website.

Now, for the first time, 50 of the funniest Diagram winners and runners-up have been reproduced in full glorious colour, in this anthology of the oddest of the odd. Here are wildly implausible titles such as Bombproof Your Horse, People Who Don’t Know They’re Dead (our favourite) and The Big Book of Lesbian Horse Stories, not forgetting the classic Greek Rural Postmen and Their Cancellation Numbers, voted by the public the oddest title of the past 30 years in the hotly contested Diagram of Diagrams.

Here at Desert Hearts, we vividly remember when Bob Chenciner’s book was the hot tip for the 2006 prize. It went round the world’s news several times over the year, even getting major coverage on China’s CNN and a full=page spread in the UK’s Independent newspaper. Tattooed Mountain Women was pipped at the post by Julian Montague’s The Stray Shopping Carts of Eastern North America: A Guide to Field Identification – possibly the deserved victor with such an undeniably, momentously implausible title!